Off road parking is available in our two car parks, one either side of the church building

Thursday: Mass in school at 9.30am

Saturday: Mass at 10.00am followed by Eucharistic Adoration, finishing at 11.30am with Benediction.

*Weekday times may be subject to change, please check the newsletter

Saint Philip Neri was born 21 July 1515 in Florence. Having received a mystical vision he moved to Rome where he lived and worked for the reform of the Catholic Church and was eventually ordained priest. He was known for his sense of gentleness and friendship, and his commitment to being with the lay people of Rome and always accessible to those who needed him. He was greatly respected and was advisor to popes, kings and cardinals, but never lost his focus on being with and helping the poor. He is the patron saint of the city of Rome.

As well as being patron of our church he is also the patron saint of humour and joy. He was Canonised 12 March 1622 by Pope Gregory XV and his feast day is kept on 26 May. 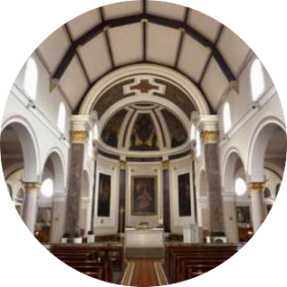 Built on land given by Bishop Bagshawe, an Oratorian, this is a bold and triumphant exercise in Italian baroque, with a particularly rich internal decorative scheme by the Hardman firm. The exterior is more retrained, but the church and attached contemporary presbytery nevertheless make a powerful contribution to the local townscape.

In 1862 a Mass centre was opened at Chandler’s Court, Mansfield, served from Ilkeston, but this seems to have lasted only for a short time. Then in 1876 a Mrs Susanna White bought the Manor House in Ratcliffe Gate and put it at the disposal of Bishop Bagshawe. A chapel was opened in the house in the following year, dedicated to St Philip Neri (being the first chapel to be established in the Diocese by Bishop Bagshawe, an Oratorian). In 1878 a dual purpose school-chapel was built in the grounds of the Manor Hose, from designs by Mr (Christopher) Wray of London.

In 1921 Fr Charles Payne became parish priest. He was an energetic figure, who was to see the building of the new church (and attached large presbytery) through to completion. The site for this had been previously given to the parish by Bishop Brindle, successor to Bishop Bagshawe. The foundation stone was laid by Bishop Dunn on 6 June 1924 and the completed church consecrated on 24 March 1925. It was solemnly opened by Cardinal Bourne of Westminster on the following day, the Feast of the Annunciation.

Fr Payne moved to Derby in 1926, and it was left to his successor, Fr John Keogh, to undertake the decoration of the church and installation of paintings, at a cost of £2000, being completed in 1934 by John Hardman and Co., Birmingham. A parish hall was also built during Fr Keogh’s time, in 1932.

In 1994 there was a major scheme of repair and sensitive reordering, by Richard Ward, Architects. This involved the glazing in of the underside of the western semi- circular gallery, the glazing in of the arcading leading off the south aisle to the baptistery, to form a separate Blessed Sacrament chapel and baptistery, and the moving of the marble communion rails to form a frontal to the first row of benches in the nave.