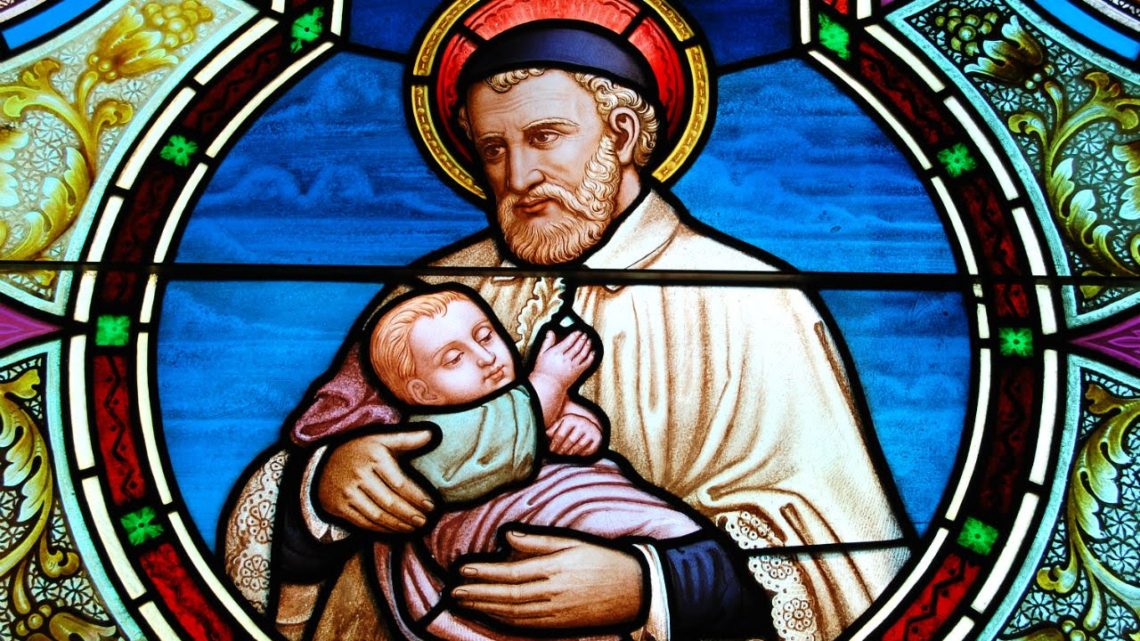 This Saturday (10.00am, 28 September) Bishop Patrick will celebrate Mass with the Anointing of the Sick at Saint Philip Neri to mark 100 years of unbroken mission by the Society of Saint Vincent de Paul in our parish. All are welcome to attend the Mass, and a history of the SVP here in Mansfield can be read below.

To celebrate the Centenary year of the Conference Holy Mass of Thanksgiving was celebrated by His Lordship the Bishop of Nottingham the Right Rev. Patrick McKinney at the Church of St. Philip Neri, Mansfield on Saturday, 28th September 2019.

Co-ordination and maintenance of fraternal liaison with Council General is via the Nottingham District Council and the National Council for England and Wales.

These words from St. Matthew’s Gospel provide a fitting introduction to this brief historical survey of just one of the hundreds of groups of Catholic laymen and women who voluntarily practice the spiritual and corporal works of mercy.  It was in Paris in 1833 that a 20-year-old law student, Antoine Frederic Ozanam, with seven companions, laid the foundations of the now international Society of St. Vincent de Paul.  The Council-General in Paris has jurisdiction over the whole Society, which is linked together through national, central and district councils and parish conferences.  After 86 years of existence, and surviving the first world war, the Society became represented in Mansfield when the parish Conference of St. Philip Neri was formed.

The first meeting of this new branch (or conference) of the SVP was held in a school classroom adjoining the church in Ratcliffe Gate, in the presence of the Parish Priest, Father J. Prince, S.J.  It was on Sunday, 10th August 1919 and 13 brothers attended, the forerunners of a continuous succession of members who have carried on the Society’s traditional work for 100 unbroken years, again surviving another world war.

The collections maintained an average weekly income of around 12s., but the “exchequer” received a very welcome boost when a new honorary member, Mr James Alston, who was a licensee of the Horse and Jockey Inn, Leeming Street, forwarded a £5 donation.  During these early weeks of the conference’s existence the monetary resources were a somewhat limiting factor in the extent of material aid disbursed to families and to individuals, clothing and coal.  One of these items, clothing, figures in an interesting entry in the first minute book recording a meeting held on the 12th October 1919: “In the capacity of keeper of the wardrobe, Bro. Badley will visit the jumble sale at the schools next Friday with a view to purchasing suitable clothing.”  A case of the SVP helping themselves to help others by helping the parish.

At that same meeting it was agreed that certain members would pay weekly visits to Catholic inmates of the workhouse and hospitals (the workhouse was situated where Mansfield Community Hospital is now situated on Stockwell Gate).  Two officers of the Nottingham Central Council attended a meeting about this time and expressed themselves “extremely pleased” with the progress of St. Philip’s Conference.

Every conference desirous of admission into the Society must apply to the Council-General for aggregation and at their meeting on 11th January 1920 the brothers of St. Philip Neri’s Conference received the Letter of Aggregation, which indicated that the date of aggregation was 22nd December 1919.  It was decided to have the document framed (but it is, unfortunately, missing) and to celebrate this official recognition by a general reception of Holy Communion on the following Sunday.

On the 15th May 1920 Bro. George McDonagh became Secretary in place of Bro. John McDonagh and in January 1921 a new office of librarian was filled by Bro. John Fisher.  The last recorded attendance of Father Prince as Spiritual Adviser prior to his leaving the parish was on 13th February 1921.  His active support and advice had guided the conference during the formative period and laid the foundation of a parish organisation which has continued its work up to the present time.  The new Parish Priest was Father (later Mgr.) Charles Payne, who also took a great interest in the work of the Society.

Membership changed very little in the early years; a few more brothers were enrolled and some honorary members and benefactors were listed.  Attendance at meetings, however, declined slightly and collections, therefore, suffered, averaging about 6s. per week.

On 2nd October 1921 Bro. John Fisher was elected Secretary, Bro.  George McDonagh leaving to study for the priesthood.  Bro. Fisher was to continue in this office until 1940.

It is, perhaps, relevant at this point to refer to what must be rather unique in any organisation – the length of service given by members in office.  In the first 60 years of the Conference it had only four Presidents, seven Secretaries and four Treasurers.  Bro. M. J. McDonagh served as President for 32 years in that time and he was succeeded by one of his sons, Bro. Francis Louis McDonagh who presided for nearly 19 years until his death in 1970.  He had relinquished the office of Treasurer on being elected President, serving in his former position for five years – a total period in office of 24 years.  Due to the New Rule agreed by a Plenary Meeting in Dublin in 1973, after five years as an Experimental Rule, the length of service as President is limited to five years, with an option for a further three.  The other Presidents have been Bro. Patrick Conlon, Sister Ruth Leach, Sister Anne Freestone, Bro. Tom Dillon, Sister Caroline Thompson, Bro. Julian Smith and Sister Mary Smith.  In 2014 Bro. Tom Dillon resigned his membership, having completed a remarkable 70 years of service.  Bro. Fisher’s 19 years as Secretary was followed by two other lengthy periods – 16 years by Bro. William Watkins and 17 yeas by Bro. Robert Wilkins.  These three members spanned a total of 52 of the Conference’s first 60 years.

For a short time between 1958 and 1960 a junior conference was tried but there were insufficient members to continue.

An important date in the local Society’s history is the 16th March 1971, when under the Experimental Rule it saw the introduction of the Ladies’ Conference in the parish, established with nine members – Mrs. W. E. Joseph was elected President, Mrs. E. Hoskins, Vice President, Mrs. A Freestone, Secretary and Miss Ruth Leach, Treasurer.  This “new blood” revitalised the work of the Society in the parish and after four years the almost inevitable amalgamation of the men’s and ladies’ conferences brought into existence the present mixed conference, whose first meeting was on 30th March 1975.  The officers elected from the membership of 15 were Sister A Freestone as President, Bro. T. Dillon Vice-President, Sister S Callaghan, Secretary and Sister R. Leach, Treasurer.

Not a Society needing or desiring a numerically large membership, the attendance at meetings averaged about 10 members throughout the first 60 years and in the whole of that period probably not much more than 60 parishioners had been active members; a few others had been honorary or auxiliary members, helping with prayers and alms, as were a number of others in the role of benefactors.  The nature of the work does not call for undue publicity, either for families or individuals helped or for the members carrying out their duties.

What can be recorded are the various ways in which the Conference has tried to fulfil the aims and objects of the Society, each type of charitable act being multiplied tens or hundreds of times over the years.  Turning the pages of the minute books reveals that visits to families, individuals, hospitals and institutions have averaged over 1,000 a year, each being in some way the practical application of Our Lord’s command: “Love your neighbour as yourself”.  These visits have conveyed not only sympathy in times of sickness, hardship, bereavement and loneliness, but material help where and when most needed.

It has at times been necessary to arrange for the funerals of Catholics who have died in public institutions or while living alone and without family or near relatives.  The provision of food packs (especially at Christmas), medical items, wheelchairs, clothing, footwear, bed linen, furniture and coal are regularly entered in the records, as does assisting with pilgrimages of the sick to Lourdes, conveying handicapped persons to Mass and providing social gatherings, concerts and outings for the elderly and infirm.  Help with the administration of the estates of deceased persons, the gaining of improved disability pensions and aid with the often bewildering task for older people of filling in various official forms and documents  — these have all added to the total and variety of good workswhich members of the SVP in Mansfield have endeavoured to perform. Co-operation with Government and Local Authority departments has also been of great help on numerous occasions.

Concern for the welfare of others beyond the confines of the parish is evidenced by the help given to wayfarers; support for the SVP camp at Mablethorpe and after-care hostels for young offenders. Through the national Society’s “twinnage” scheme, St. Philips Conference initially adopted the Infant Jesus parish of Alangad in Kerala, India and donations were periodically sent to relieve poverty in this part of the world. The Conference donations helped to provide, among other things, some sewing machines. Later, the Conference was twinned with two more parishes for several years.

Mindful of the need for personal sanctification, members have attended retreats and days of recollection and each meeting has a period devoted to spiritual reading. Annually, Holy Mass is offered for the spiritual and temporal welfare of the members of the Society on the first Sunday in Lent; on the 8th September (Our Lady’s birthday), for deceased members on the Feast of St Vincent de Paul (27th September) and on the Feast of the Immaculate Conception (8th December) for the Church, the Pope, the Society and England. All meetings open and close with prayers.

For many years the Society’s funds benefitted from collections taken after the Sunday Masses in Advent and Lent. From 1945 to 1971 the Conference sold Catholic newspapers and periodicals and some income was, in the past, derived from the collection and sale of wastepaper.

In this Centenary year the St. Philip Neri’s Conference expresses its gratitude to His Lordship the Bishop of Nottingham, Patrick McKinney for celebrating the Mass of Thanksgiving on Saturday, 28th September 2019. Members of the Conference also thank St. Philip’s parish for its support and ask parishioners to continue their prayers and offering of monetary gifts so that the charitable works performed will bring comfort and sustenance to those who are helped and secure an abundance of grace and blessings for those who help.

Extract from the Society’s General Principles

No work of charity is foreign to the Society …. The Society is concerned not only with relieving need but also with redressing the situations that cause it. It serves persons in need, regardless of creed, opinion, colour, caste and origin.

Vincentians see through prayer, meditations on the Scriptures, the teaching of the Church, through their daily lives and in their relationship with those in need, to bear witness to the love of Christ.

Christ said, ‘You have the poor with you always’. The vocation of the Vincentians is the service of those in need. They do not judge and they are available as their time and their resources permit.

Membership is open to Christians of all ages and both sexes who have the will to commit themselves to active personal service in the works of charity within the Society.